Koji has been an important part of Japan’s food culture for centuries.
But it has always been hidden backstage, making it hard to notice — what, exactly, is koji, and what does it do?
This month, let’s learn about the incredible power of koji, and the huge role it plays in everyday life in Japan!

Q: What is koji?
A: “Koji” refers to cooked rice, barley, or soybeans with koji fungi mixed in.
In Japanese, these are referred to as “rice koji,” “barley koji,” and “bean koji,” respectively. 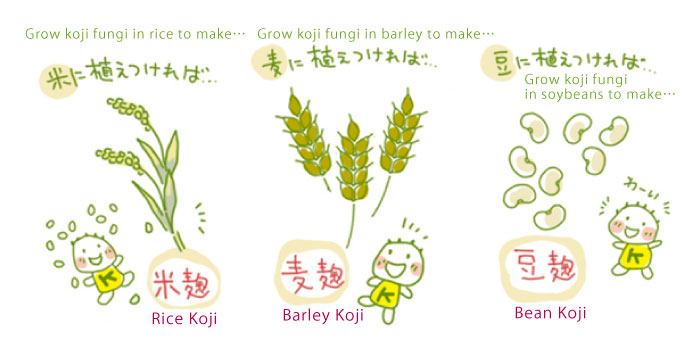 Q: What Are Koji Fungi?

A: For centuries, microscopic fungi called koji fungi (“kōji-kin” in Japanese) have been cultivated to make koji, and have long been a part of making fermented foods in Japan. Japan’s warm, humid climate is a perfect habitat for these fungi, and these fungi have only traditionally been used in Japan, leading the Brewing Society of Japan to declare koji fungi to be the National Fungi in 2006.

Trivia Time!
Why Are There Two Different Ways to Write “Koji” in Japanese?

The most common character for “koji” is commonly used to refer to rice koji, barley koji, or bean koji. However, there is another character created in Japan (combining the Chinese characters for “rice” and “flower”) that is generally used, on its own, to refer specifically to rice koji, and almost never used to refer to barley or bean koji. As a result, when Japanese people refer to rice koji in writing, they either write “rice” and the more commonly used character for koji, or they write the other character for koji by itself (because otherwise, it would be like writing “rice rice koji”). On the other hand, there are regions where these rules aren’t observed quite so strictly.

Of course, there are also local terms for rice koji used only in certain areas, as well: for example, in Kanazawa, Ishikawa, it is known as “white koji” (written using the character for “rice koji”), and even sold in stores under that local name.

Q: What makes koji so healthy?

A: Koji contains enzymes, which are very important for keeping our bodies running. While we can’t really eat koji itself, we can eat the fermented foods it helps produce, which contain enzymes produced through fermentation, as well as lots of nutrients produced by those enzymes.

But there’s more to it than just eating these nutrients — if we don’t break them down (digest them) and use them throughout our bodies (metabolize them), then our bodies wouldn’t be able to keep working. Enzymes play an important role in helping our bodies get these important nutrients, and foods fermented with koji contain plenty of enzymes.

Koji is said to contain hundreds of different enzymes. We still don’t understand all of them, but some of the main enzymes include amylase (breaks down starches), protease (breaks down proteins), and lipase (breaks down fats). These enzymes help break down the nutrients in the foods we eat, making it easier for our bodies to digest and absorb them.

Eating fermented foods helps our bodies more effectively gather high-quality nutrients from foods, and reduces the amount of work the digestive system has to do. Enzymes also help our bodies excrete toxins through sweat and urine, and help boost immunity. Eating foods made with koji, which is rich in enzymes, helps keep our bodies healthy, and can even help keep us from getting sick. 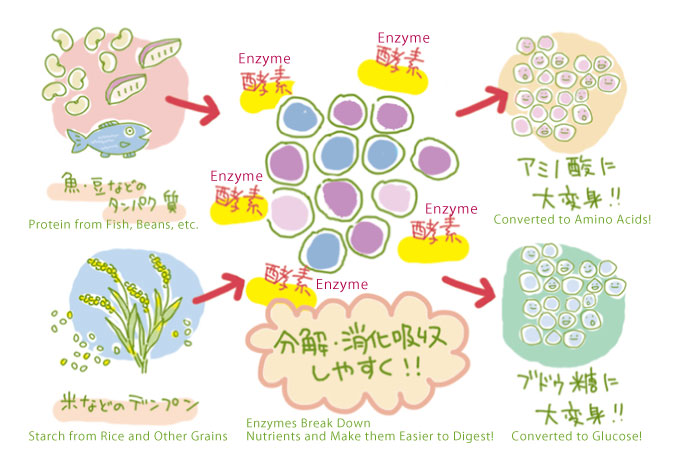 Q: What kind of nutrients do enzymes help give us?

A: The fermentation process uses enzymes to produce a variety of essential amino acids, B vitamins, and many other active ingredients from foods, as well as to help cultivate the growth of effective microorganisms like Lactobacillus bacteria. These nutrients and effective microorganisms provide a number of health benefits, from helping to activate the body’s metabolism, to helping to improve the intestinal environment.

Nutrients and Effective Microorganisms, and Their Effects

Q: What kinds of effects does koji have if you cook with it?

By themselves, the starches and proteins in foods are flavorless. If you mix koji in and let it rest for a moment, though, the enzymes produced by koji fermentation will start to break down starches into sugars and break down proteins into amino acids, giving foods richer, deeper flavors. Adding koji to meat or fish will break down the molecules that make them up into smaller ones, tenderizing them and giving them a mellow flavor. Many traditional Japanese foods and ingredients like miso, soy sauce, and fermented pickles, as well as modern prepared foods, take advantage of these effects that koji provides.

If you want to cook with koji at home, you can try using fermented ingredients that contain koji, like shio-koji, amazake, or shoyu–koji, which offer a wide variety of options.

Effects of Enzymes on Cooking 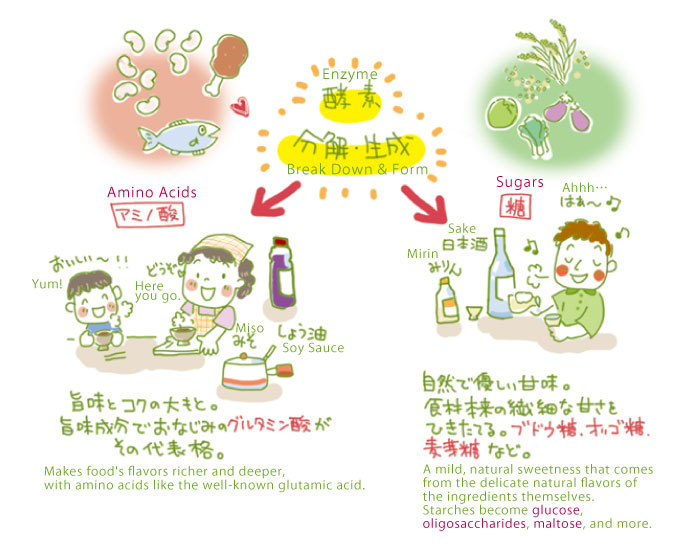 Try It Yourself! Make Your Own Fermented Condiment: Shio-koji

Shio-koji is an all-purpose condiment you can make with just rice koji, salt, and water, and is usually used as a replacement for salt. It doesn’t just make foods tastier — it helps improve the intestinal environment and increase metabolism, making it healthy in addition to delicious.

Koji contains many enzymes: amylase helps break down starches into sugars, giving food a natural sweetness; this is why foods like rice and potatoes that contain a lot of starches become sweeter. Protease is an enzyme that breaks down proteins into amino acids, tenderizing meats and fish and giving them a richer flavor. Lipase is an enzyme that breaks down the fats in foods, making them feel less oily. Shio-koji can also help bring together the flavors in the ingredients, giving dishes a delicious mellowness. In short, shio-koji is the perfect thing to add to foods that seem to be missing a certain something.

Another Advantage: Cut Your Sodium Intake with Shio-koji!

Using shio-koji instead of salt can help give your foods the richness and depth you want, but with much less sodium — only about an eighth of shio-koji‘s mass is salt!

If you’re worried about having too much sodium in your diet, try using shio-koji in your cooking!

Shio-koji adds depth and richness to anything, regardless of whether you’re cooking Asian or Western dishes.

The enzymes in shio-koji break down starches very effectively, so it doesn’t work very well in starchy foods like potato salad, harusame (cellphone noodle) salad, or rice balls. Potato salad will lose its texture and turn into a thick goop, and rice balls won’t stick together properly. 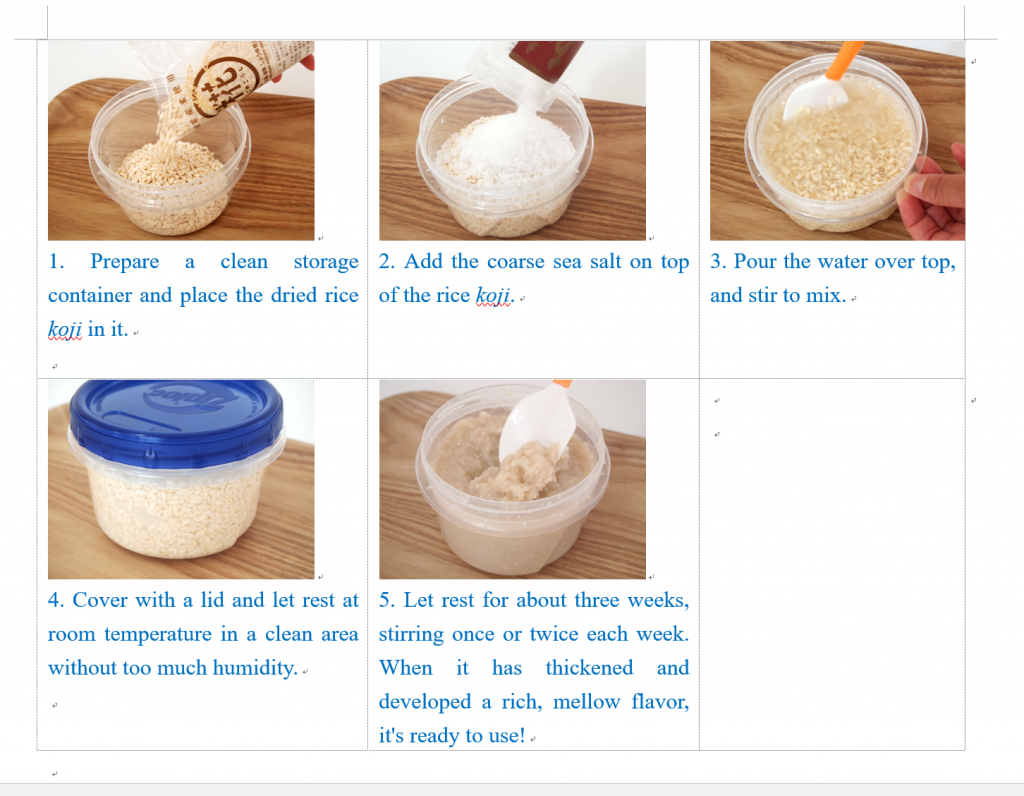 (10 days to two weeks in summer, or about a month in winter)

Signs That Something Is Wrong (Time to Try Again!)

If the surface starts to develop blue, pink, or gray mold, that’s a sign that other unwanted microorganisms got in, and that it’s time to start over with a new batch. White mold is harmless and can simply be scooped off the top, but if you’re having trouble telling if it’s white mold or not, then it’s best to play it safe and throw it out.

Please Take Our Quick Survey!
Are you interested in learning more (in English) about the fermented foods and ingredients that are a vital part of Japanese cuisine?
Click here to take our one-click survey! 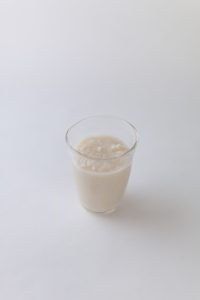 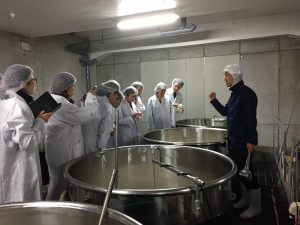